Hello Experts, one 5G ENDC question:
Why don’t we always see inside the RRC Connection reconfiguration message to establish the SCG cell the IE “tci-presentinDCI”?
Why is this one missing and how dues UE changes beams in mobility inside same PCI/Cell in this case?
Can anyone provide an example with message of how this is done?
I’m interested about the DL messages, how the UE is instructed to change beams if not by TCI command inside DCI.

When TCI-present in DCI it is pretty clear how beams are changed. But when it is not present, how is it done?

When TCI-present in DCI it is pretty clear how beams are changed. But when it is not present, how is it done?

It goes like this: time to time gNodeB sends in DL a MAC CE with 8 beams possible to be configured. Then in DCI time to time UE gets this TCI information to switch to the new beam (one of those 8 possible beams inside the MAC CE) at a specific moment in time. All is done based on UE reporting RSRP of best 4 beams periodically

This is to my understanding, I may be wrong but this is what it is written on sharetechnote about this.

As I know beam refinement still not available for now.

Beam refinement only valid for FR1 it’s not available till now.

Yes, correct. As multiple option there in report quantity.
What I know most of vendors using CSI-RS for beam switching.
It can be CSI-RS and or SSB.

CSI-RS beams can be two types as well: Grid of beams, meaning precoded weigths to cover the cell footprint or any weights to generate any CSI-RS beam that will track the UE.

Beam switching in case of TCI-presentinDCI=true is explained nice on sharetechnote here:

Yet it is missing how to know that beam switching is done on SSB or CSI-RS.
Also it is missing what is happening when tci-presnetinDCI is not present in RRC connection reconfiguration message.

In 5G, once UE report CSI gNB select best beam having predefined weight for UE.
In mMIMO on the basis of SRS eNodeB apply short and long term weight for UE beam.
SRS based reporting in 5G for beam selection will come in later release.

@ankgitm, let’s take it slowly.
Which parameter dictates that beam switching is based on CSI-RS beams or based on SSB beams?

On sharetechnote it is written that this combination of parameters dictates if SSB or CSI-RS.
But there are cases (circled in red) where both of them are valid so it is not clear which one o fthem is used. 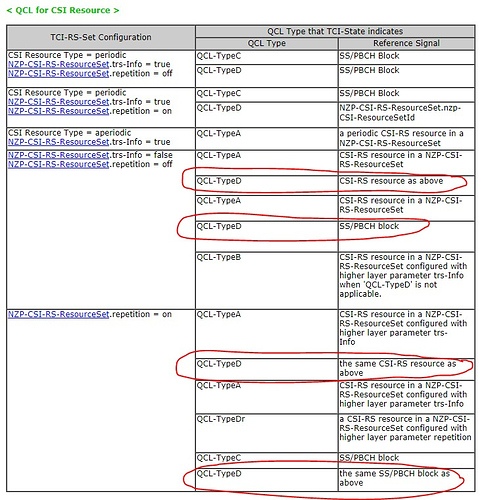 Well… I have to admit, I have not seen it either. But it is described in sharetechnote.
Maybe we have not seen all logs from all vendors.

We should find another reference then.

It is vendor dependent.
Anyway it seems Huawei does not transmit tci-presentinDCI, maybe other vendors do transmit it.

What we have in ShareTechNote is:

When tci-PresentInDCI = omit or PDSCH is scheduled by DCI 1_0

Since PDCCH is transmited only using SSB means PDSCH could use only SSBs beams.
Or what else could we understand from the explanation?

1_0 is for RA_RNTI means in between msg1 - msg2 its using coresetzero.

Transmission configuration indication (0 or 3 bits): The size of this field is zero bit, if
RRC parameter tci-PresentInDCI is not enabled; otherwise it would carry 3 bits.