Even if you’re enjoying gloriously fast broadband at home wherever you live in the world, you’re still going to be a long, long way behind the new record for data transmission: an incredible 1.02 petabits per second.

That’s a million gigabits shifted down a line every single second. The record was set by a team at the National Institute of Information and Communications Technology (NICT) in Japan, transmitting the data over 51.7 kilometers (32 miles).

To put it another way, there’s enough bandwidth here to transmit not just one 8K video feed, or a hundred or a thousand 8K video feeds, but 10 million 8K video feeds simultaneously. That’s a lot of Netflix.

One of the exciting aspects of the new data transmission speed record is that researchers achieved it using an optical fiber network not dissimilar to those currently used for internet infrastructure. This, the researchers say, should make future upgrades towards this sort of speed easier.

Only a year ago, researchers from the same institute were getting maximum speeds around a third of what they’ve now managed, showing the rapid development of the technology.

The experiment used 0.125 mm diameter multi-core fiber (MCF), with wavelength division multiplexing (WDM) acting as the magic ingredient: This technology means signals of different wavelengths are sent simultaneously through the line. A total of 801 parallel wavelength channels were packed into the same line.

Another innovation was to use four cores instead of the standard one, essentially quadrupling the routes for data to take, all while keeping the cable the same size as a standard optical fiber line. Researchers also applied various other optimization, signal boosting, and decoding technologies. 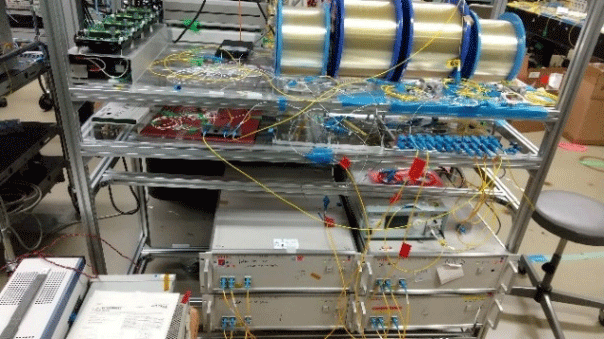 World's First Successful Transmission of 1 Petabit per Second in a Standard...

Researchers from the Network Research Institute at the National Institute of Information and Communications Technology (NICT, President: TOKUDA Hideyuki, Ph.D.) report the world's first demonstration of more than 1 petabit per second in a multi-core...

Even if you're enjoying gloriously fast broadband at home wherever you live in the world, you're still going to be a long, long way behind the new record for data transmission: an incredible 1.02 petabits per second.