Why Teams Are Lazy? Social Loafing

In 1913 Maximilian Ringelmann, a French engineer, studied the performance of horses. He concluded that the power of two animals pulling a coach did not equal twice the power of a single horse. Surprised by this result, he extended his research to humans. He had several men pull a rope and measured the force applied by each individual. On average, if two people were pulling together, each invested just 93% of their strength, when three pulled together, it was 85 percent, and with eight people, just 49 percent. That’s known as Ringelmann Effect.

In another experiment Derek J.de Solla Price, who was a British physicist, historian of science, and information scientist, discovered something about his peers in academia. He noticed that there were always a handful of people who dominated the publications within a subject.

Price found out the following :

Price’s law says that 50% of the work is done by the square root of the total number of people who participate in the work. 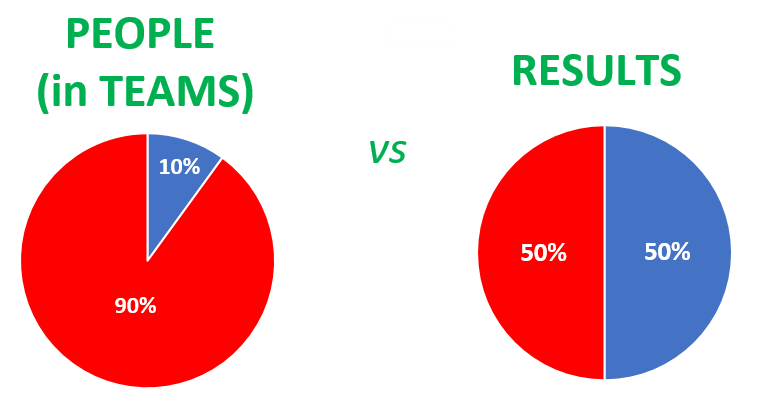 Science calls this the social loafing effect. It occurs when individual performance is not directly visible; it blends into the group effort. It occurs among rowers, but not in relay races, because here, individual contributions are evident. Social loafing is rational behavior: Why invest all of your energy when half will do - especially when this little shortcut goes unnoticed? Quite simply, social loafing is a form of cheating of which we are all guilty even if it takes place unconsciously, just as it does with the horses.

But Social loafing does not occur solely in physical performance. We slack off mentally, too. For example, in meetings, the larger the team the weaker our participation! However, once a certain number of participants are involved, our performance plateaus. After that, whether the group consists of 20 or 100 people is not important – the maximum inertia has been achieved.

One question remains: Who came up with the much-vaunted idea that teams achieve more than individual workers? Maybe the Japanese. Thirty years ago, they flooded global markets with their products. Business economists looked more closely at the industrial miracle and saw that Japanese factories were organized into teams. This model was copied—with mixed success. What worked very well in Japan could not be replicated with the Americans and Europeans—perhaps because social loafing rarely happens there. In the West, teams function better if and only if they are small and consist of diverse, specialized people. This makes sense, because within such groups, individual performances can be traced back to each specialist.

Social loafing has interesting implications. In groups, we tend to hold back not only in terms of participation but also in terms of accountability. Nobody wants to take the rap for the misdeeds or poor decisions of the whole group. A glaring example is the prosecution of the Nazis at the Nuremberg trials or, less controversially, any board or management team. We hide behind team decisions. The technical term for this is “diffusion of responsibility.” For the same reason, teams tend to take bigger risks than their members would take on their own. The individual group members reason that they are not the only ones who will be blamed if things go wrong. This effect is called “risky shift” and is especially hazardous among company and pension-fund strategists, where billions are at stake, or in the Defense Department, where groups decide on the use of nuclear weapons.

And what are the implications? When people work together, individual performances decrease, however, our input doesn’t grind to a complete halt. So what stops us from putting our feet up completely and letting the others do all the hard work? The consequences! Zero-performance would be noticed, and it brings with it weighty punishments, such as exclusion from the group. Evolution has led us to develop many fine-tuned senses, including how much idleness we can get away with and how to recognize it in others.

We mean by the phenomenon of the impact of social loafing that if an individual is in the middle of a group doing a specific task, he or she tends to make less effort than he or she would if he were doing the job alone.

This phenomenon is mainly due to several reasons:

Amazon founder Jeff Bezos pointed out this when he introduced the “2 Pizza” task force law, which states that the ideal team consists of 2 pizzas for dinner, which can be translated into between 5 and 9 people.

If a team that can’t be fed by 2 pizzas, it’s too big to discuss ideas.

In conclusion: People behave differently in groups than when alone (otherwise there would be no groups). So the next time you work on a group project or a team task, ensure that you have a defined process that highlights and rewards individual performance so that all members are fully invested in getting the task done. The disadvantages of groups can be mitigated by making individual performances as visible as possible. Long live meritocracy! Long live the performance society! 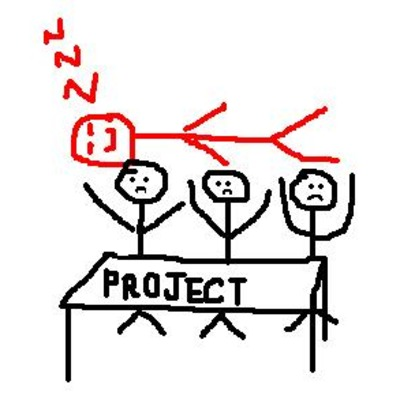 And you: do you agree this phenomenon happens in your company too?