Can someone help me to understand (easily explained) what is CBRS?

The Federal Communications Commission (United States of America) established CBRS as a way for shared wireless broadband use of the 3550- 3700 MHz band, which is more commonly known as the 3.5 GHz band.

It was opened up 150 MHz of spectrum in the 3.5 GHz band for commercial use. (Note: This is spectrum traditionally used by the military and commercial satellite operators and Wireless Internet Service Providers (WISPs).)

Band 48 CBRS (Citizens Broadband Radio Service) is often referred to as the private LTE. It is the frequency band of 3.5GHz, operating in the LTE spectrum in the United States. LTE was designed to work across a wide range of frequency bands (450 MHz up to 3.8GHz) referred to as E-UTRA.

CBRS SAS: The CBRS Spectrum Access System (SAS) is a cloud-based service that manages the wireless communications of devices transmitting in the CBRS band, in order to prevent harmful interference to higher priority users. A CBRS device (CBSD) needs authorization from the SAS before it starts to transmit in the CBRS band. 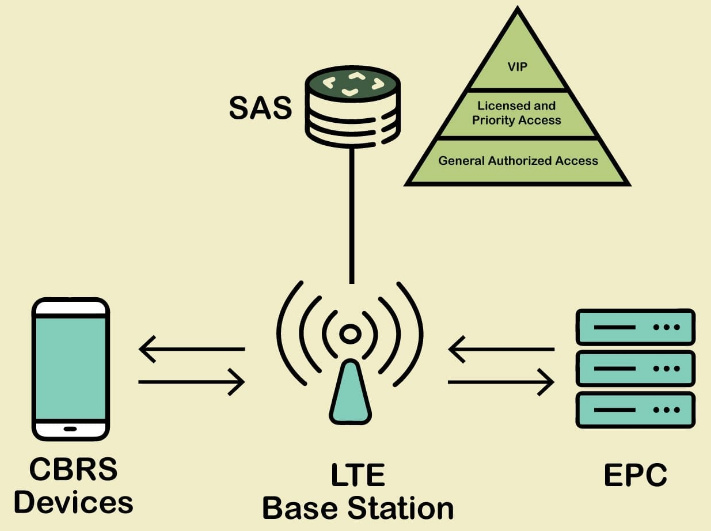 It is also worth to know the concept on how CBRS is sctructured.

As you said, part of CBRS’ infrastructure is built through the Spectrum Access System (SAS). This system makes the three-tiered spectrum-sharing framework the FCC adopted for CBRS a possibility.

The three tiers of CBRS spectrum use are:

• Incumbent: for existing users like Department of Defense personnel and US Naval Radar, incumbents get permanent priority and site-specific protection for registered sites.

• Priority Access License (PAL): for organizations that pay a fee for use. Organizations can request up to four PAL’s for three years in a limited geographic area. Only the lower 100 MHz of the band is for sale.

• General Authorized Access (GAA): the remainder of the spectrum, open for general use.

SAS is a coordinator within the CBRS 3.5 GHz band and works to shield the higher-tier users from lower tier users and optimizes efficient use of the available spectrum in the band for all users. The system also has a record of all CBRS radio base stations with information such as the stations’ tier status, location and whatever other details needed to coordinate frequency, transmit power assignments and keep an eye and protect the band from interference. Currently at least 80 MHz of the 150 MHz spectrum must be available for GAA use, according to FCC rules. Exceptions can be made if no Incumbents are present. Sometimes all of the 150 MHz could be available if neither Incumbents nor Priority Access Users are in the area.