What is use of MAC CE in DL?

Prioritising here is indicating scheduling functionality of MAC layer.
MAC layer is responsible for prioritising UEs to be scheduled based on set scheduler algorithm it includes both Frequency and Time division scheduling.

Logical channel prioritization is used at UE side while constructing UL MAC PDU.
General concept is, If UE get less UL grant than the data it have to send in uplink, data for high priority logical channel is prioritise first.

In DL also similar concept might be used (but I don’t have exact idea about DL).

Thanks @sadanandk2. And yes, actually I’m looking for DL side.
For UL side it’s mentioned explicitly in documents.

Is this random number equal to contention resolution identity?

No, it’s not s-tmsi.
It’s contention resolution id as part of MAC CE give to UE.

I find in some documentation that UE with match msg3 id it transfer to eNodeB with this id.
So I think it’s more or less random number sent by UE in msg3.
It’s named as contention resolution identity in DL once eNodeB sent to UE.
S-tmsi used in case of service request scenario to identify MME.

I also read in one document that UE send either c-rnti if it have, or s-tmsi to eNB.
In msg4 eNB will send same identity in Downlink.
So UE whoose doesn’t match, contention get failed.

But i need to recheck this.

Yes, generally UE avoid to send IMSI as random number.
I read it too .

For s-tmsi not sure, also need to check.

Contention Resolution identity from eNB reflects the msg3 sent by UE so that only the relevant UE can continue further communication and other UE(s) will back off. 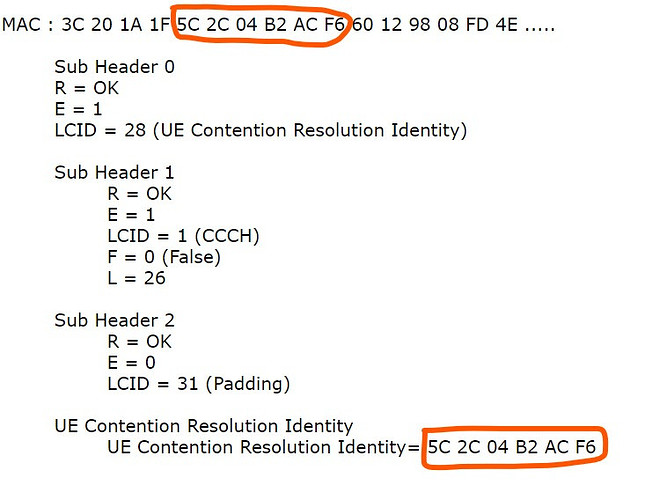 This functionality is from UE side in which data can arrive from multiple LCs whereas we know resources are limited.
At that time MAC sub-layer in UE will decide data from which LCIDs will be prioritized as per UE side algorithm.
I did not find any specific algo in the specs so I guess this should be a chipset-specific algo implementation.

Someone may correct me here about the algo part.

This is for LTE but provides the general idea:

Here is link to all call flows.
Very detailed and good descriptions for 4G and 5G.

In DL also similar concept might be used (but I don’t have exact idea about DL).

Logical channel prioritization not there in Downlink.

Yes, I never read about DL. Thats why said no idea.