What is the difference between cell reselection and IRAT Handover?

can anyone tell what is the difference between cell reselection and IRAT Handover,
whic one takes place in idle mode and which one in dedicated mode.

Cell Reselection happens only when the UE (or Mobile Phone) is in Idle MODE, and the UE needs to go a more appropriate cell.

It’s a ‘way’ that UE uses to change the cell it is camped on, reselecting a ‘better’ cell.

For this, the UE follows a process (algorithms) and criteria.

When the UE is turned ON, it makes a Cell Detection/Search, than a Cell Selection and finally completes de Registration, and stays in IDLE Mode.

As you can see, cell reselection criteria is the most important set of parameters for having good cell reselection, and it is mainly defined by Absolute Priority, Radio Link Quality and Cell Accessibility.

Now for the IRAT Handover.

Differently from Cell Reselection, IRAT HO happens when the UE is in CONNECTED mode (but just like in the former, the UE needs to go a more appropriate cell).

The UE change its cell and goes to another cell; but in this case the UE has an active call (connection).

Also like in Cell Reselection, the UE follows a process (algorithms) and criteria. (Actually, this ‘general’ logic is almost the same – or at least very similar - in any type of handover/selection/reselection/redirection, in every technology – based on measurements and values of parameters (timers, triggers, events, etc.), follows a workflow to evaluate ‘what to do’).

The UE connected in one RAT stays continuously performing several measures, for its current cell and its neighbors (including other RATs), and send this information to the network. The network, based on the measurement report received from the UE, can decide if it’s better (or not) for the UE go to another RAT.

When the UE is in connection with a cell, we can have ‘situations’ that require the IRAT HO to be performed (i.e. UE going out of 3G coverage area for a 2G coverage area only).

The network see this situation, and ask measurements from the UE (for the probable new target cell) to evaluate the conditions.

If the evaluation indicates that is better for the UE to perform the handover, the network instructs the UE to change for the new cell, and it do so - and finally respond to the network, informing that everything is OK, and it is connected in the new target cell.

It’s clear that for the IRAT HO be successful it is very important to have proper parameters defined, as said before.

This is the main challenge we all (working with telecommunications) face every day, and you can see a ‘big picture’ with all main possible bellow. 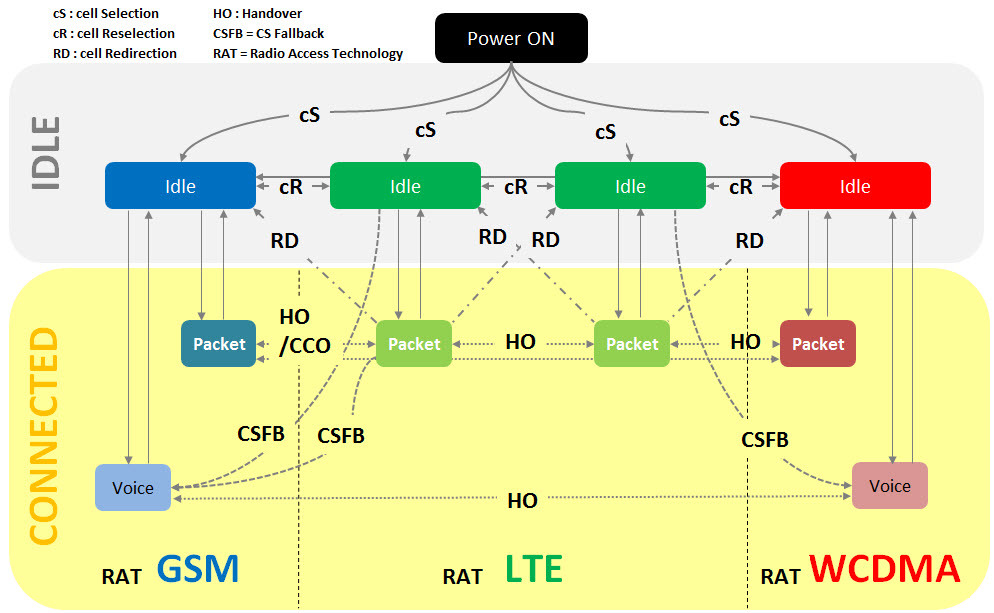 Although it doesn’t cover every possible case, it shows the most common ones. And I believe can be a starting point to understand the basic concepts that we all must have.

Kindly explain me more about CSFB procedure when UE is idle mode and connected mode. Thanks in advance

CSFB happens when a mobile needs to go back to a legacy network (2G/3G), to use its CS infrastructure to make a Voice Call.

You can find a better explanation (a little more detailed) here:
What is CSFB and SRVCC in LTE?

So during handover procedure, UE will continue with the services which were being used by UE. But in case of re-direction, services will be interrupted.

Thanks for the explanation.