New technologies are increasingly present in our lives, evolving towards modern - and complicated - networks!

To enable this ‘Revolution’, new techniques must be developed, and existing ones need to be improved.

Here in telecomHall ‘Course’ we’ll talk about these techniques, as always trying to explain each subject in the simplest possible way, allowing to understand how these innovations may have become reality.

We begin today with: MIMO. Have you ever heard about it? 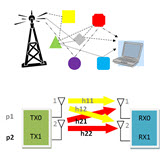 Even if you already know what it is, we invite you to read this brief summary prepared for you.

Before we talk specifically about MIMO, let’s know, or remember what it also means SISO, SIMO and MISO.

Although it may sound like some sort of lock tongues, in fact these letters correspond to different types of a radio channel use. That is, refer to the access modes of the radio channel, any transmitting and receiving system.

Let’s start with SISO - "Single Input, Single Output ', as this model more intuitive. As the name implies, we only have one input in the radio channel, and only one output.

When the system has multiple inputs and only one output, we have MISO - ‘Multiple Input, Single Output’.

In this case we have multiple entries, and only one output.

Note: in practice, we can have more than one antenna. Just to simplify the demonstration we will limit ourselves to a maximum of two antennas in the illustrations.

Remember we are talking about the radio channel, the figure below helps to better understand this nomenclature.

So pretty much opposed to MISO, we also have SIMO - ‘Single Input, Multiple Output’.

Once this naming is understood, we can talk about MIMO.

At first glance, and comparing with the previous access, MIMO seems to be simple, but unfortunately it’s not.

Its operation is much more complex than the others: we now have multiple inputs and multiple outputs. The biggest challenge is how to recover the original information correctly?

See illustration of a more realistic scenario, showing what happens in practice.

Although more complex, it brings is a huge performance gain, or spectrum use efficiency, as discussed below.

And again, the way MIMO works, with its variations, is very complex. We will try to show here just simply how it works, that is, as is possible.

A good analogy to learn the concept of MIMO is to imagine that we have two ‘mouths’ and use the two mouths to ask someone:

With two mouths talking at the same time, if the other person’s ears are well cleaned, and it’s a smart person, he/she’ll be able to understand.

That is, we speak ‘four words’ in the ‘same time’ that we would speak ‘two words’.

What does this mean? In terms of data, assume that each word has 100 KB. So we’re sending 400 KB. But since we are transmitting two streams in parallel, each with a piece of data. That is, we pass the 400 KB in half the time it would take to transmit typically with a stream. 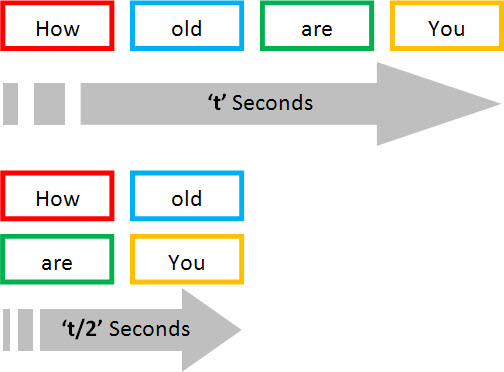 Simply put, this is what makes MIMO possible, and enables attaining high rates of 300 to 600 Mbps!

Thus, MIMO is used to improve wireless access in a large number of applications. Several access standards such as LTE, WiMax, HSPA and WiFi use this gain to achieve the significant improvements that each one has.

And now we have a concept that seems to be against everything we learned: MIMO is based on interference at line of sight (LOS), ie, the signal path between the station and mobile.

To MIMO present some advantage, we need a good diversity in the signal.

In other words, anything that interferes with the signal path such as buildings, cars, people, etc… are actually contributing to the overall system efficiency, and effectiveness of MIMO applications.

The diversity of the signal - that doesn’t take a direct path between the transmitter - once viewed as a problem, is now making it possible for the data streams to be combined and recovered!

As seen in the analogy above, MIMO allows the sending of more than one stream of data on a single channel. It effectively doubles the speed that he have on that channel - considering the use of two antennas.

But okay, how does it work?

In the past, DSP’s, or Digital Signal Processors were very hard to be developed, due to a lot of past limitations. Currently however, DSP development have evolved a lot - and are still evolving. This kind of processors today are very powerful, able to recover our transmitted signal when it arrives at the receiver at different time intervals.

The DSP’s then have the responsibility to take the data, ‘separate’ in different parts, send each part via different antennas, at the same time, at th same channel. And do the reverse process at the receiver.

The result is obvious: we are able to send a certain amount of data in half the time it would normally take.

Each antenna has its own stream of data, both in transmission and reception. In the end, then we have the data received.

Remember, the Multipath varies according to location, and this variation is very dynamic - difficult to predict. Still, the multipath makes it possible for the receiving antenna to differentiate between data that was transmitted on the same channel at the same time.

Then enter the access via OFDM - ‘Orthogonal Frequency Division Multiplexing’. Let’s talk more about this type of multiplexing / access in another tutorial, but OFDM is very important to MIMO for new generations of cellular technologies.

It is easier if we make a comparison.

In a single carrier systems have symbols (or ‘pieces of information’) transmitted over broadband, each transmitted sequentially, and for a relatively short period of time. 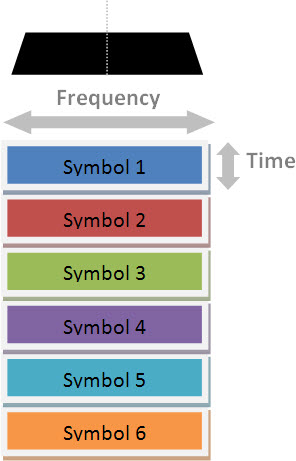 In the OFDM symbols are transmitted in parallel, each using a relatively very narrow spectrum. However, each symbol is transmitted by a much greater period of time! 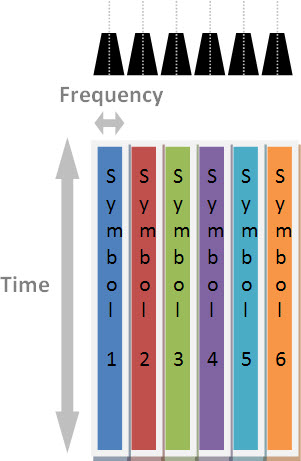 This scenario represents an advantage in signal reception, since it is much easier for the receiver to check each of the symbols - even if they suffer some degradation - because they are transmitted over a much longer period.

In wideband transmission, during the short time interval in which each symbol is transmitted, we may have problems with data loss, making it difficult to recover information. If there is interference in the signal, a significant part of it can be degraded and may end up making it impossible to receive certain symbols (pieces of information) correctly.

In the OFDM, while the bandwidth is narrower, each transmitted symbol stands for a much longer time, and the chances of successfully recovering are higher.

The following sequence helps us understand this concept. 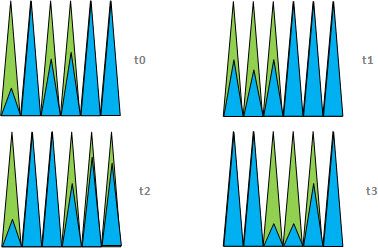 And each symbol is being transmitted over a much longer time period. And even when we have a problem of fading at some point we’re probably still able to retrieve information.

Thus, with transmission of the symbols in parallel and for a longer period of time, the greater the chances of success at the reception!

Another new fact concerning what we understand about transmission and reception of data: the known and common scenario for us is to have one antenna on the transmitter, transmitting at a certain frequency, and another antenna on the receiver, receiving at this this same frequency.

And perhaps the most innovative concept: all the antennas transmit at the same frequency with different data transmitted by each one!

Surely, this is different from everything we learned in school, because we learned that the frequencies will certainly interfere with each other, and end up losing all our data.

No more. Fortunately, using new advanced technologies of DSP’s we can, for the same frequency, transmit different data on different antennas - and simultaneously. And the receiving antennas, we can differentiate between these streams of data.

It is not difficult to understand that this represents a huge advantage in terms of spectrum use efficiency.

In conclusion, we show an example of packets decoding by a MIMO receiver.

Returning to our initial example, suppose a transmitter with two antennas. Using the nomenclature ‘hij’ for the channel ‘h’ of the transmitter antenna ‘i’ to receiver antenna ‘j’. 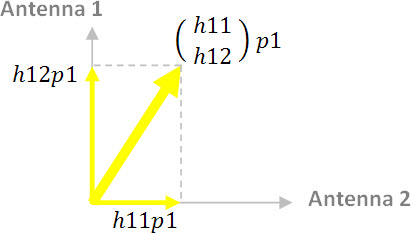 But remember that our example has two transmitter antennas, that is, while we can send another packet ‘p2’ through its other antenna.

The receiver receives ‘h21p2’ in its first antenna, and ‘h22p2’ in his second antenna. 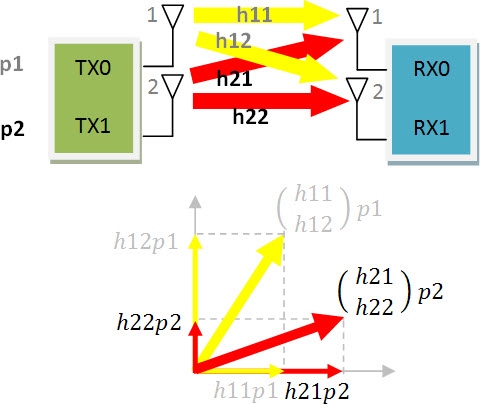 With this, we have a vector at the receiver end, defined by the sum of all vectors. 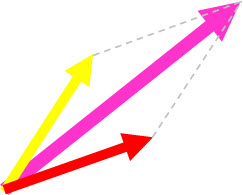 To eliminate the interference of the package ‘p2’, and so be able to decode the packet ‘p1’, the receiver projects on a direction orthogonal to it (package ‘p2’). 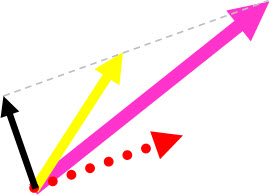 Similarly, to decode the packet ‘p2’, the receiver eliminates interference from the other package ‘p1’, projecting a direction orthogonal to the interference of it. 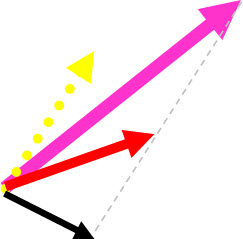 Then, with two antennas can decode two competing packages! Following the same reasoning, we can understand that the MIMO decoding allows competitors and how many packets as the number of antennas. 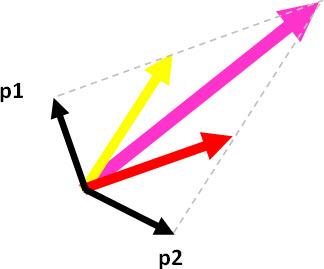 Today we had a brief introduction to MIMO, which as mentioned, is much more complex than shown, because we are just doing an introduction to even allow you to understand its basic operation.

However, the benefits it pays back the efforts of its complexity.