What is Frequency Hopping - FHSS?

We can define Frequency Hopping as a communication scheme between a transmitter and a receiver. There are several concepts involved, such as spread spectrum modulation and switching frequency according to a known standard.

Frequency Hopping (FH) is widely used for example in GSM Networks, so let’s understand a little more about it today. 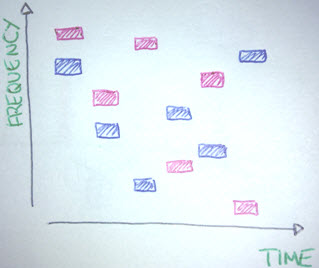 But before we talk about FH: does who invented it?

Several people competes for this title, as the German Johannes Zenneck in 1908 through his company: Telefunken. He shares the title with a Polish inventor, who also exposed the idea.

But particularly, I like the exotic version, where a beautiful actress (yes) Hedy Lamar, along with her neighbor George Antheil were also responsible, in the Second World War time.

Hedy was married to a German arms manufacturer. Issues like security, especially how to send text messages using a signal that could not be interfered with by the enemy naturally came to mind.

If you send a torpedo controlled by a continuous signal, the signal can be identified by the enemy, which in turn can insert a high noise and shoot it down.

Once at the piano the composer George played a note, and Hedy repeated on another scale. It was then that she realized it was possible to establish a communication by changing the communication channel, just for this, they should make the change at the same time, ie, following a pattern known to both.

And if any of these frequencies are suffering interference? Well, we still have other channels in the sequence of jumps, from where information can be retrieved!

Like any great invention, note that the idea is simple.

Well, after a brief history, I hope you have understood the idea behind FH.

After the initial contribution of inventors, the idea was perfected, and is now used in various systems such as GSM, as already mentioned.

FH has mainly the purpose of avoiding interference, and we’ll see how he gets it.

In FH, the information is spread over a bandwidth much larger than is required for its transmission. For this, it is divided into several channels of lower bandwidth.

Knowing the sequence of jumps that must be followed, the receiver and transmitter jump through these channels.

This is a pseudo-random sequence, and that’s what makes the FH also secure, since unwanted receivers can not intercept the signal because they do not know the sequence. The only thing they see are noises of short duration.

For each application with its full range of frequency, it is defined as bandwidth, hop number, and maximum average time that each frequency must be busy.

We should also stress that in FH do not need continuous bands. In scenarios where the available bandwidth is limited and not contiguous, the spectrum can be better used (Actually, this is more a feature comparison between narrowband x broadband systems ).

Speaking specifically about the GSM now, we’ll finally understand how the interference is avoid.

To do so, as always, let us take an example of a network with 10 MHz bandwidth. As the channel of GSM is 200 kHz, we have 50 channels available. Remember that each GSM channel has 8 time slots, and considering Full Rate we have 8 users.

It may seem to many channels, but believe me, a major planning challenge is to spread these channels in a GSM network avoiding interference problems. To illustrate, suppose a network with 100 sectors each BTS 3: we have 300 sectors, and only 50 frequencies. Naturally, the channels must be reused, which inevitably result in the same channels used in different sectors.

And there we have the co-channel interference, a major problem to be solved, especially in dense GSM networks.

Not only the problem of co-channels, we also have the problem of multipath, compounded by the fact that GSM band is narrow. A signal can leave the transmitter, and due to obstacles, be reflected in a way that will eventually interfere with the original signal that arrives at the receiver, since this signal is out of phase, because it had to ‘travel’ more.

And it is especially in these cases that FH helps us.

For clarity, consider an sector with channels A and B. Hardly all slots of all channels are in use all the time. Even if a particular slot of channel A is also in use in another sector - co-channel interference, chances are that another slot of channel B are not! That’s what FH does: changes the frequencies and slots of the call! 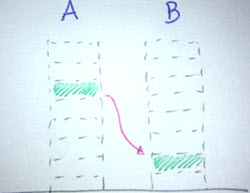 Thus, each user runs a much lower risk of suffering co-channel interference.

In other words, a channel can be suffering interference, but we have other channels in the sequence of jumps that may be no interference! When the network uses FH, and moves our call slot to slot, and frequency to frequency, the interference is turns into a random effect.

We still, as we speak, the problems of multipath. And the idea is basically the same. By jumping from one frequency to another, the user suffers the effects of multipath problem by a very small periods of time. (Remember we use narrow bands!)

In both cases, whether co-channel interference or multipath fading, there are the error correction algorithms, which achieve the most efficient way to clean and recover the original signal.

Finally, we see a simplified diagram showing the steps involved in establishing a communication using FH. 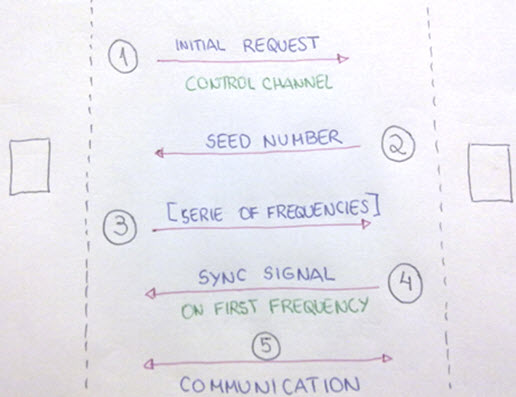 First, the transmitter sends a request (1) to start the FH through the control channel. The receiver, after receiving this request sends a base number (2) back. The transmitter then uses that number, calculates and sends the series of frequencies (3) to be used. With this list of frequencies, the receiver returns a synchronization signal (4) in the first frequency of the list. Thus, communication between the two is established (5).

And what are the disadvantages of FH?

Like any spread spectrum communication, we need a bigger band than would be necessary if it were used only a single frequency to carry the signal.

Furthermore, whenever a communication is established, it takes a significant time, to establish sync between the receiver and transmitter.

Anyway, the advantages outweigh these points.

We now know the simple idea of frequency hopping, a spread-spectrum modulation scheme, where it is possible to establish a communication over a single logical channel, based upon the timing of changes (jumps) in frequency among them, following a pseudo-random sequence known by both.

As a result, using the FH have a signal more robust - interference resistant, and secure - to be very difficult to intercept.