I have a question, please help me:

Dynamic Spectrum Sharing is a technology that allows the deployment of both LTE and 5G NR in the same frequency band and dynamically allocates spectrum resources between the two technologies based on user demand.
Suppose, without DSS, an operator that has 20 MHz of mid-band spectrum would have to split that spectrum in two. In other words, they would have to allocate 10 MHz of spectrum to 4G LTE and cram all their LTE users into that 10 MHz of spectrum. Then the remaining 10 MHz of AWS spectrum could be used for 5G, even though initially there will only be a minimal number of 5G users.

With DSS, an operator doesn’t have to split that mid-band spectrum or have a dedicated spectrum for either 4G LTE or 5G. Instead, they can share that 20 MHz of spectrum between the two technologies.

You can google and find a lot of papers in this regard.

These URLs may help you

5G is not only poised to be the fastest cellular transition ever, but also the smoothest, thanks to innovations in the 5G standard enabling a phased evolution and tight interoperability with current 4G networks.

Stay ahead of the game with Ericsson Spectrum Sharing (ESS). Control and increase your 5G coverage at a pace that matches your business needs.

Good explanation to begin understanding what is DSS and how Huawei solves the incompatibility problem effectively.

I would also recommend these videos: 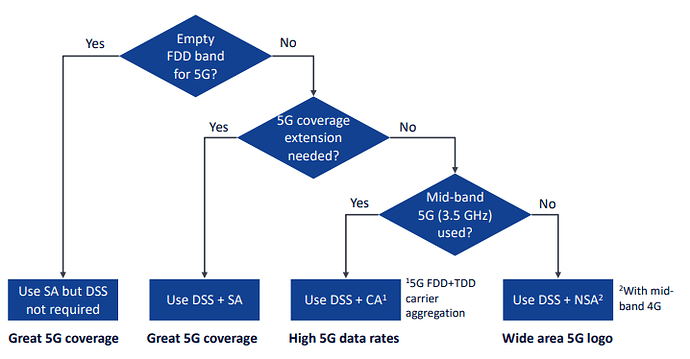