Kindly for the first Question; check below is your first question or not. Too much complicate for RACH

Upon receiving the preamble, the eNodeB applies for a temporary cell RNTI (C-RNTI) and uplink and downlink scheduling resources. Then, the eNodeB sends a random access response over the downlink shared channel (DL-SCH) for each UE. The response contains the RA-preamble identifier, timing alignment information, initial uplink grant, and temporary C-RNTI. One DL-SCH can carry random access responses to multiple UEs.

If the UE receives a response containing an RA-preamble identifier which is the same as the identifier contained in the transmitted random access preamble, the response is successful. The UE then transmits uplink scheduling information.

This function can optimize the procedure of non-contention-based random access initiated by a UE beyond the cell radius to ensure the successful access.

The optimized procedure is as follows:

An eNodeB receives a dedicated preamble that is a retransmission preamble, and both of the following conditions are met:

Then the eNodeB delivers the RAR message that carries the preamble index of N+1 to the UE.

Detection of non-contention-based random access beyond cell radius is controlled by the NonContRaOptSwitch option under the CellAlgoSwitch.RachAlgoSwitch parameter.

This function is recommended during off-peak hours when the non-contention-based random access success rate in a cell is lower than expected. This function takes effect only when all of the following conditions are met:

For example: at point 0,UE received dedicated preamble ID 63 which assigned by eNodeB, but at point 1 eNodeB calculate the preamble is 62 as it is based on UE access distance which is exceed cell radius. Preamble ID 62≠63，normally eNodeB will reject UE access，but after we enable NonContRaOptSwitch, eNodeB will consider it is ok as 62 is near 63 and eNodeB will send RAR with preamble ID 63 to UE at point 2，then UE access successful. 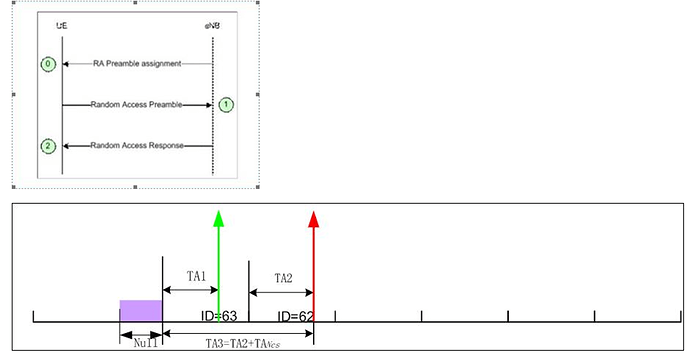