Paging:
The network initiates a service request procedure and notifies the UE through a paging procedure.

S1 Release:
An S1 release procedure is used to release the logical S1-AP signaling connection (over the S1-MME interface) and all S1 bearers (over the S1-U interface) for a UE. In this procedure, all UEs in the ECM-CONNECTED state and those on the MME are switched to the ECM-IDLE state, and all UE-related context information is deleted from the eNodeB.
An S1 release procedure can be initiated by either of the following NEs:

1/ When the S-GW receives a downlink packet for a UE and the UE’s user-plane connection has not been established (that is, the S-GW context data indicates no downlink user-plane TEID), the S-GW caches the downlink packet and identifies the MME serving the UE.
2/ The S-GW sends a Downlink Data Notification message to the MME that has established a control-plane connection with the UE.
3/ The MME responds to the S-GW with a Downlink Data Notification Acknowledge message.
4/ The MME sends a Paging message to each eNodeB in TAs registered by the UE.
5/ The eNodeB initiates paging to the UE.
6/ If the UE is in the ECM-IDLE state, it performs a UE-initiated service request procedure upon receiving a Paging message from the E-UTRAN. If the MME has established a signaling connection with the UE over the S1-MME interface, a sequence of messages is sent when the MME establishes bearers.
The MME uses a timer to manage the paging procedure. If the MME receives no response to the Paging request message from the UE, it repeats paging.

1/ Optional: If the eNodeB needs to release the UE signaling connections and radio bearers, the eNodeB sends a UE Context Release Request message to the MME. The message contains Cause. Cause indicates the release reason, which can be O&M Intervention, Unspecified Failure, User Inactivity, Repeated RRC signaling Integrity Check Failure, or Release due to UE generated signaling connection release. This step is not required in an MME-initiated S1 release procedure.
2/ The MME sends a Release Access Bearers Request message to the S-GW to request the release of all S1-U bearers for the UE.
3/ The S-GW releases all eNodeB-related information (addresses and TEIDs) of the UE and sends a Release Access Bearers Response message to the MME. Other elements of the UE’s S-GW context are not affected. The S-GW retains the S1-U configuration that it has allocated to UE’s bearers. The S-GW then buffers all downlink packets received for the UE and performs a network-initiated service request procedure (paging procedure).
4/ The MME sends a UE Context Release Command message to the eNodeB to release S1-interface resources. The message contains Cause.
5/ Optional: If the RRC connection has not been released, the eNodeB sends an RRC Connection Release message to the UE in acknowledged mode. Once the message is acknowledged by the UE, the eNodeB deletes the UE’s context.
6/ The eNodeB sends a UE Context Release Complete message to the MME to confirm the S1 release. In this situation, the signaling connection between the MME and the eNodeB is released for the UE. This step is performed immediately when 4 is complete and cannot be delayed when the UE does not acknowledge the RRC Connection Release message.
The MME deletes all eNodeB-related information (addresses and TEIDs) from the UE’s context on the MME, but retains the rest of the UE’s context, including the S-GW’s S1-U configuration information (addresses and TEIDs). All non-GBR EPS bearers established for the UE are retained on the MME and S-GW. 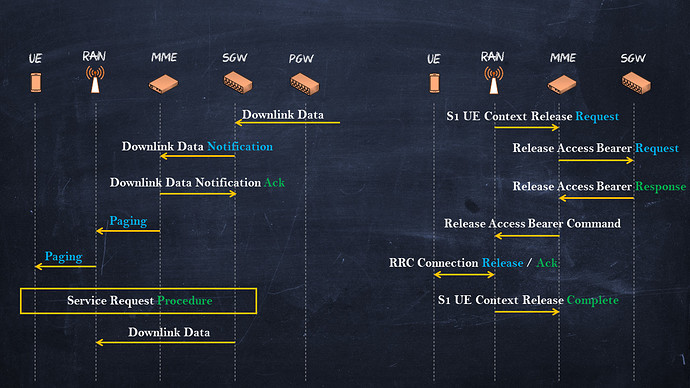