Here you can find a very good whitepaper from Samsung for DSS.
In this paper, the overall benefits of DSS are presented. In addition, 3GPP standard functions that deal with the coexistence of LTE and NR – as well as the implications, design principles, and side effects that they dictate – are introduced. Lastly, the considerations, performance degrading factors, and concerns associated with DSS are discussed. 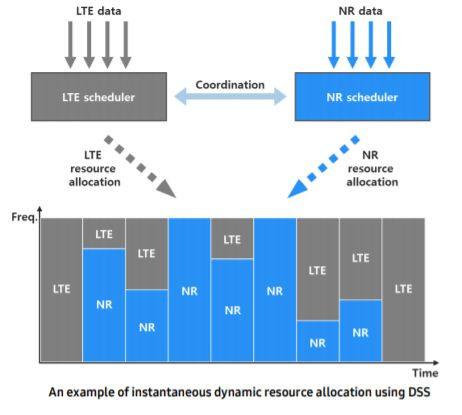 Samsung Electronics today released a whitepaper titled “Dynamic Spectrum Sharing,” focusing on DSS technology along with its key benefits. DSS is an advanced feature that enables both 4G and 5G to be simultaneously deployed and co-exist in a single carrier. By accommodating both 4G and 5G users on the same spectrum with dynamic resource allocation, Samsung’s DSS solution can effectively maximize operational efficiency and offer a smooth transition from 4G to 5G for operators.

DSS dynamically assigns time-frequency resources between 4G and 5G according to their respective traffic demands to accommodate both users, while optimizing resource utilization. In the early stages of 5G, DSS is advantageous in that it only allocates the required amount of resources for 5G users, and retains the remaining resources for 4G users. As the demand for 5G grows over time, DSS can allocate more resources to 5G services.

With DSS, 5G is able to share the frequency bands used by 4G, allowing operators to swiftly expand 5G coverage while eliminating the need for new spectrum allocation for 5G.

Samsung’s DSS technology has been deployed commercially in the U.S. over a virtualized 5G RAN. The Samsung DSS solution can be used on both traditional hardware-based and also virtualized-based radio networks, enabling the maximum flexibility for customers.

For additional information on Samsung’s DSS, refer to our whitepaper: