Cellular IoT Explained – NB-IoT vs. LTE-M vs. 5G and More

5G—especially for cellular IoT—has been on everyone’s lips. Tom Wheeler, the former head of the FCC, said recently, “If something can be connected, it will be connected to 5G.” Just Google “5G IoT” and you’ll see something exciting like Network World’s recent prediction that 5G could unlock long sought-after innovations in IoT such as automated lifecycle management, network slicing, software-defined networking, and cloud-optimized distributed network applications. Qualcomm recently predicted that upgrading IoT networks to 5G could unlock up to $12 trillion in new goods and services, adding that 5G “will be bigger than electricity.”

5G is fast becoming a major catalyst for the next wave of devices and platform architectures, allowing us to build a new generation of rapid IoT connectivity at even greater scale.

Mobile phones will likely transition to 5G sometime during the early 2020s, however, the future for IoT is right on the horizon. At the 2018 LII Superbowl in Minneapolis, Verizon used 5G to demo 4K video streaming to VR headsets in NYC. Samsung and Korean Telecom (KT) dazzled at the Olympics by streaming self-driving car data and 360-degree camera views through 5G-enabled edge servers.

That’s all very exciting for our industry, but decoding the mess of technical acronyms surrounding 5G technology can limit our ability to understand how 5G will change the IoT landscape. For example, searching “NB-IoT vs. LTE-M” brings up complex summaries like the one below: 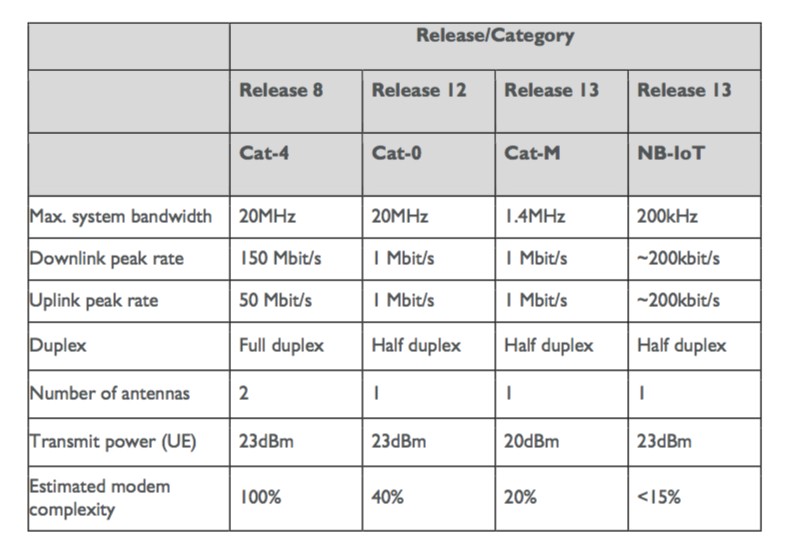 Such graphs didn’t help me at all. I got the impression that 3GPP (the group behind 3G) was trying to keep out new players by overwhelming them with mysterious acronyms and exclusive technical definitions. The naming convention indicates that 4G is faster than 3G, which is faster than 2G, so we assume 5G is probably going to follow that trend, but “Cat-1” and “EC-GSM”? What does that mean?

Don’t worry! I did my research and translated the technical details of each 5G option into laymen’s terms to prepare you better to understand these emerging forms of cellular IoT.

Where did cellular IoT originate?

The popularity and ubiquity of IoT devices have led to the rise of low-power, wide-area networks (LP-WAN) options such as SigFox, LoRa, and Weightless. (In case you’re wondering, here’s why LPWAN is important in IoT and a breakdown of the different options).

Traditional cellular options such as 4G and LTE networks consume too much power. Moreover, they don’t fit well with applications where only a small amount of data is transmitted infrequently, for example, meters for reading water levels, gas consumption, or electricity use.

Cat-1 is the only fully-available cellular IoT option at the moment and represents an early push towards connecting IoT devices using existing LTE networks. While the performance is inferior to 3G networks, it’s an excellent option for IoT applications that require a browser interface or voice. The major attraction is that it’s already standardized, and more importantly, it’s simple to transition into the Cat-1 network. Experts predict that as 3G—and eventually 4G—technologies sunset, Cat-1 (and Cat-M1) networks will take its place.

It’s important to understand that different cellular IoT options do not necessarily have to be mutually exclusive. Click To Tweet

For LTE-based IoT networks to succeed, they need to have the following characteristics: 1) long battery life, 2) low cost, 3) support for a high volume of devices, 4) enhanced coverage (better signal penetration through walls for example), and 5) long-range/wide spectrum.

Cat-0 optimizes for cost as it eliminated features that supported high data rate requirements for Cat-1 (dual receiver chain, duplex filter). While Cat-1 is replacing 3G, Cat-0 is the protocol that set the groundwork for Cat-M replacing 2G as the cheaper option.

Cat-M (officially known as LTE Cat-M1) is often viewed as the second generation of LTE chips built for IoT applications. It completes the cost and power consumption reduction for which Cat-0 originally set the stage. By capping the maximum system bandwidth at 1.4 MHz (as opposed to Cat-0’s 20 MHz), Cat-M has specific use cases for LPWAN applications like smart metering, in which only small amount of data transfer is required.

But the real advantage of Cat-M over other options lies in this: Cat-M is compatible with the existing LTE network . For carriers such as Verizon and AT&T, this is great news as they don’t have to spend money to build new antennas, although meshing Cat-M into LTE networks requires a software patch. The existing customer bases of Verizon and AT&T will most likely conclude that Cat-M is by far the superior option. Lastly, it’s almost certain that 5G and LTE technologies will coexist well into the 2020s, so the backward-compatibility of Cat-M is a bonus.

NB-IoT (also called Cat-M2) has a goal similar to that of Cat-M; however, it uses DSSS modulation instead of LTE radios. Therefore, NB-IoT doesn’t operate in the LTE band, which means that providers have a higher upfront cost to deploy NB-IoT.

Nonetheless, NB-IoT is being touted as the potentially less expensive option , because it eliminates the need for a gateway. Other infrastructures typically have gateways that aggregate sensor data, which then communicate with the primary server. (Here’s a deeper explanation of gateways). With NB-IoT, however, sensor data is sent directly to the primary server. For that reason, Huawei, Ericsson, Qualcomm, and Vodafone are actively investing in commercial applications of NB-IoT. Sierra Wireless predicts that by the end of 2018, NB-IoT and LTE-M will be available in many global regions.

EC stands for Extended Coverage. EC-GSM is the IoT-optimized GSM network, the wireless protocol 80 percent of the world’s smartphones use. As the name suggests, EC-GSM can be deployed in existing GSM networks—a huge advantage in terms of practicality and modularity, since a simple piece of software enables EC-GSM connectivity within 2G, 3G, and 4G networks. EC-GSM also has specific use cases in non-Western regions such as Malaysia, and African and Middle-Eastern countries, where 2G remains a popular standard. Ericsson, Intel, and Orange are said to have completed live trials of EC-GSM earlier this year. EC-GSM, however, isn’t generating as much buzz as Cat-M or NB-IoT.

Unlike the cellular IoT options above, 5G has yet to be officially defined . Next Generation Mobile Networks Alliance (NGMN) is pushing for specs for it to be 40 times faster than 4G while supporting up to 1 million connections per square kilometer. 5G is already enabling high-bandwidth, high-speed applications for Ultra-HD (4k) streaming, self-driving car connectivity, or VR/AR applications, such as Verizon and Samsung showcased at the Superbowl and Olympics respectively. What will the future hold?

Why You Should Care

If you are a cellular carrier provider, you will be forced to choose a technology to deploy to meet the narrowband IoT applications.

For the rest of us, it’s important to understand that these different options do not necessarily have to be mutually exclusive . This extends to other LPWAN players like SigFox, LoRa, and Weightless (read more at Calum McClelland’s “Which LPWAN Technology is Right for You”).

IoT covers a broad spectrum of applications. Sometimes you need high bandwidth, as with real-time surveillance. For asset tracking, data throughput is small, but there are inevitably many handovers as objects move. Smart meters and many smart city use-cases require small data transfer once or twice a day. This means that no one technology (even 5G) may fit the specific needs of an IoT solution/device. 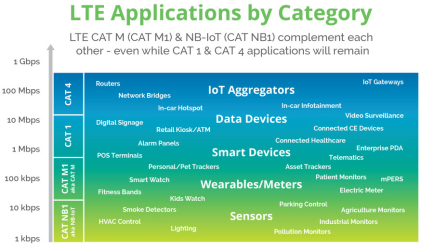 Fragmentation within IoT sucks, but sometimes it’s a necessary evil because IoT is by definition such a broad field. Generally, the most important question is, what are the specific requirements and nuances of my use case? The answer to that question leads you to the question of which connectivity options are best for you. 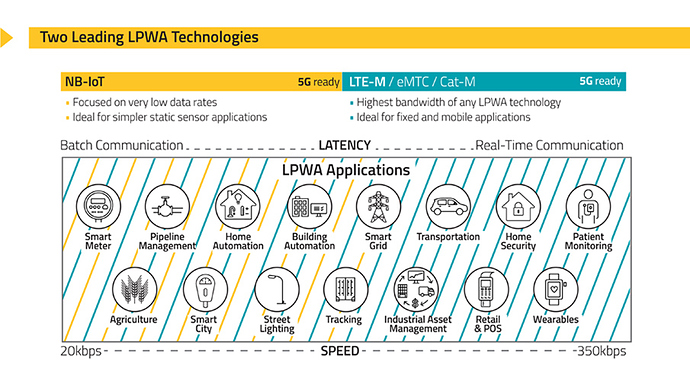 As the diagram above demonstrates, the often-frustrating answer is: “it depends.”