Hello Expert,
Can someone share is there any benefit of Dynamic Spectrum Sharing for end user?
And can we implement DSS with different spectrum band combination with LTE?

By nature, DSS has significant losses in both 4G and 5G, since the cell and spectrum resources are shared between the two. These losses are independent of algorithms specific to any equipment provider, and innate to the definition of functionality.

DSS is a relatively easy technology to implement and its challenges are similar to others that operators have already experienced. It requires that spectrum assignments be technologically neutral, that is, that the spectrum has been assigned by type of service (for example, mobile or fixed) and not by technology.

It shows 5G on your UE, so people will be happy (or sad, seeing the icon but having 50Mbps on speedtest haha). Jokes aside, the rollout strategy must be carefully defined, or you may give the impression that 5G sux. It is supported with different BWs, yes.

I second this view.
DSS is just an early introduction of 5G.
More like marketing thing.

Maybe DSS can help you for to boost your 3.5Ghz TDD coverage by FDD-TDD NR CA.
This is case if you have no space to allocate dedicated spectrum for NR on FDD area like Band 1 or Band 3.
NR PUCCH on 3.5 GHz TDD could suffer weaker propagation than DL PDSCH 3.5 Ghz and therefore 3.5 Ghz PDSCH coverage is limited as well.
This is just in theory, I am not sure how does it really works in practice.
I have tested E/// DSS in lab and LTE thot loss is 8% and NR thpt loss is 30%.
So it was under ideal conditions.
Band 1 was used 20 Mhz channel.

For rollouts which already have a carrier in a higher band, let’s say, 3.5GHz, deploying DSS in a lower band, let’s say, 1.8GHz, will help to expand the effective 5GNR coverage footprint be performing CA between DSS-NR_on_1.8 and NR_on_3.5.

Without DSS-NR_on_1.8, your Uplink with NR DL feedback will go through the NR_on_3.5, which will be seriously limited, impacting the overall (DL and UL) performance of NR being the UL of NR_on_3.5 the limiting link.

On the other hand, if you have DSS-NR_on_1.8 doing CA with NR_on_3.5 and DSS-NR_on_1.8 is the PCELL, you uplink will run through it, which means, you will have a gain into you effective NR footprint since now the DL of NR_on_3.5 is the limiting link.

Once again, this gain is limited to NR CA scenarios, and this is the only gain i see as an engineer, not as a marketing person.

Thanks. Can you share any link and document to understand this concept.

Please correct me if I’m wrong. The way I perceive DSS is that in order to implement this feature,Central frequency of 4G and 5G carrier has to be synchronized. Also they have to share same physical antenna that means physical attributes like electrical tilt, azimuth etc. would have to be same.

If this is the case than I don’t see how DSS can be implemented on different.

Here you have a really nice paper which explains it in details. You are looking for this figure 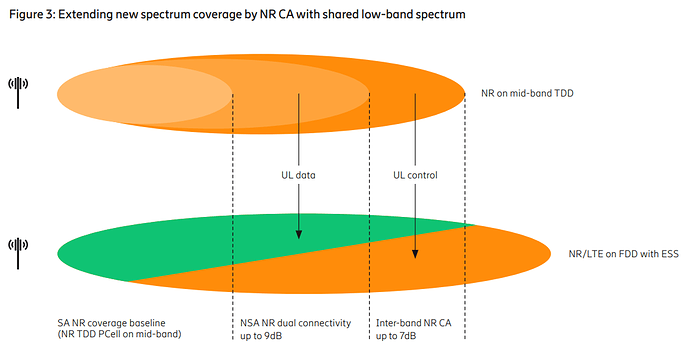