5GENESIS builds an experimentation facility that is accommodating experimenters to run
validations and experiments on top of a 5G infrastructure. One of the prominent capabilities of
the 5G technology is the ability to create network slices to satisfy the diverse requirements of
each deployed vertical use case over the same infrastructure. This deliverable discusses and
details the design, specifications and implementation of the 5GENESIS Network Slice Manager
and more specifically the first release of the software. The slice manager is the component that
manages the creation and provision of network slices over the infrastructure and is the binding
element between the 5GENESIS Coordination layer and the actual infrastructure and
management and orchestration layer, as shown in Figure below. The Slice Manager receives the
network slice template from the Coordination Layer and then provisions the slice, deploys the
network services, configures all the physical and virtual elements of the slice and finally
activates the end-to-end operation.

Initially document analyses the main concepts and terminology of network slicing as well as the
current status and progress related to slicing in various Standards organisations and
opensource communities. In addition, implementations from relevant 5G European funded
projects are analysed. The other part of the document, details analyses the requirements
relevant to the Slice Manager and the system use cases. That section is vital for the architecture
definition and the first release of the software. The Slice Manager architecture is exploiting
microservices approach with all the communications between the components to be realised
through a message bus. The design results in a high degree of modularity and expandability and
can be easily enhanced with further improvements (i.e. high availability, health monitoring,
new southbound drivers etc). The refined details of the lifecycle operations wrt the functional
use cases of the previous section are also provided. Currently the supported lifecycle
operations for network slices are creation, view, termination and modification. Furthermore,
the functionalities and purpose of the northbound interfaces of the slice manager (NBI) are
documented, providing information with respect to their implementation. The aforementioned
interfaces are supporting REST APIs and swagger documentation is available along with the
software release. The document concludes with the Release A supported features and deployment guidelines and summarises on the future work and planned updates. 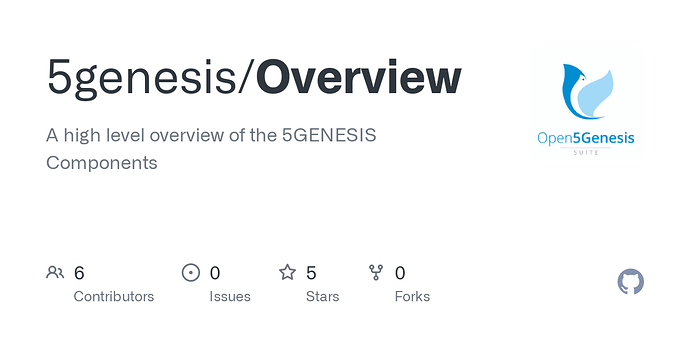 GitHub - 5genesis/Overview: A high level overview of the 5GENESIS Components

A high level overview of the 5GENESIS Components. Contribute to 5genesis/Overview development by creating an account on GitHub.