Hi.
I am trying to learn the 5G physical layer by writing my own 5G Rel-16 compliant PHY simulator but am having trouble understanding the resource grid alignment in the multi-numerology case.

In the simplest example,for a 5 MHz bandwidth channel, only SCS 15 and 30 kHz are allowed, and thus the component carrier has two SCS-specific-RB grids defined for it here.

When I plot the TxBandwidth configuration (NRB) in this case, I get the following: 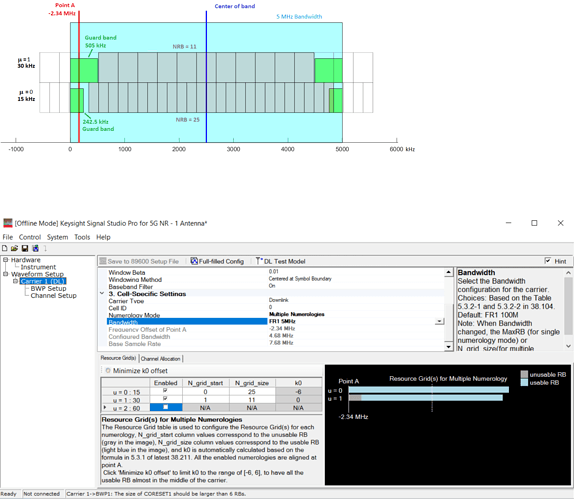 In the above Figure, I assumed that the carrier center frequency is located at the center of the band, and that the SCS-carrier for the 15kHz grid is shifted by 6 SC, i.e. half a RB, to align with the 30kHz RB grid. Thus, k0(15kHz) is -6. Point A is then chosen as indicated.

Then, in order to satisfy the min. guard band requirements, it seems to me that the first usable CRB on each grid has index 1, since CRB#0 of both grids overlap with their respective guard band.
At least, that is my current understanding.

However, to confirm my understanding, I used Keysight’s Signal Studio Pro software and Rohde&Schwarz’s WinIQSIM2. For the basic example above, both these tools agree in their settings as shown in the bottom figure above.

For the same parameters (5MHz BW, Point A location, k0 value and NRB = N_grid_size), the tool(s) seem to indicate that the first usable CRB index is 0 for the 15kHz grid and 1 for the 30kHz grid. Why is that?

In the Keysight plot, Point A seems to coincide with the first usable RB on the 15kHz grid, but I don’t get how that alignment is obtained.

Any specialists out there willing to help out? Much appreciated!

The numerology defines the frequency/time span of an individual resource element and in consequence PRB
Frequencies below 6GHz for FDD deployment (5MHz, 10MHz, 15MHz, and 20MHz carrier bandwidth) = 15KHz, it means 1 slot = 1 subframe = 1 ms
Single beam transmission is supported in 5G FDD and carrier Aggregation is not supported.